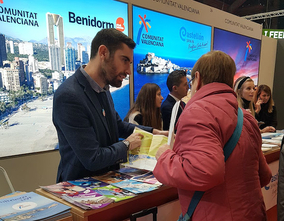 The Benidorm Tourism Foundation is taking part in the "Salon des Vacances" tourism fair in Brussels, which is celebrating its 62nd edition from 6th to 9th February at the Heysel Exhibition Centre (Brussels Expo). It is the most important tourism fair in Belgium aimed at the public.

It is a very wide showcase in which the offer of Benidorm comes ready to attract the Belgian tourist, giving him to know its main attractions for which this market feels predilection such as the good climate, its beaches, its sports offer and its gastronomy.

For thousands of visitors, this fair is an annual appointment that is essential for organizing their trips. This event is aimed at the end consumer and the average attendance at each edition is around 100,000 people, according to data provided by the organisers.

After the small decline in the number of visitors from both Belgium and the Netherlands, the Visit Benidorm Foundation has got down to work and in addition to the participation in Salon des Vacances,In the next few weeks it will also be present at two active tourism fairs, one in Ghent (Belgium) and the other in Utrecht (Netherlands).

Undoubtedly, Belgium is a priority market for Benidorm that today has direct flights with very good frequency coming not only from Brussels but from other major cities such as Liege, Bruges or Antwerp.

As for the Belgian tourist who is interested in Benidorm and the Costa Blanca, this is a senior profile that is characterized by its medium-high purchasing power and prefers to make their trips in the winter season when temperatures are very favorable compared to their country.