This Friday, 17 January, the festival in honour of Sant Antoni Abad, patron saint of the Sanz hermitage , a festival that recovers the traditions of the Benidorm s'orchard 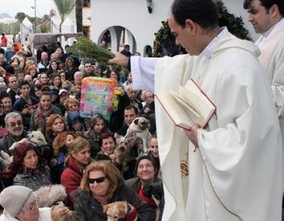 Benidorm celebrates from this Friday, January 17, the festivities in honor of Sant Antoni Abad, patron saint of the Ermita de Sanz, a festival that recovers the traditions of l'horta de Benidorm where the animals were faithful companions of the men of the garden and their lands in the day to day and meant the maintenance of many families for decades and now hosts hundreds of people who come with enthusiasm to get their animals blessed.

The celebration of Sant Antoni will begin this Friday, January 17, the day of the patron saint at 8:30 pm with a solemn mass in honor of the saint. Afterwards, the Mayorales have prepared a verbena with dancing in the tent installed in the Ermita de Sanz.

The events will continue on Saturday the 18th of January, at 8 am with an "awakening" based on thunder, music and joy in the streets of l'horta. At 11.30 a.m. a children's playground will be set up with inflatable castles to make way for the general ringing of bells from 12 noon announcing the official start of the festivities. At 1.30 p.m. a large children's mascletà will be fired.

In the afternoon, from 16.00 hours, will be played the traditional 'Pilot Tournament ' in the trinquet Vicent Perez Devesa. At 18.00 the traditional pilgrimage and offering in honour of Sant Antoni will be held. Afterwards, the proclamation of the 2020 Festival will be made by Esperanza Ivorra Fuster. The fireworks, the stamp and the firework display will put the finishing touches to the day, which will end with the awards ceremony for the traditional games of Truc and Parcheesi, which have been held throughout the year. The day will end with dancing and fun for all those present in the mayoral tent.

To end these festivities, on Sunday 19 January, there will be a blessing of animals, after the mass that will be officiated in the Ermita de Sanz at 10.30 a.m., putting the finishing touches to the events that have been programmed in honour of the patron saint of animals.